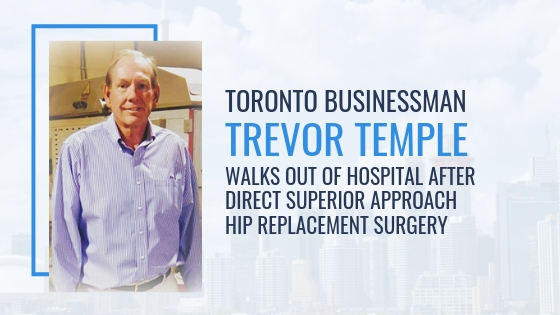 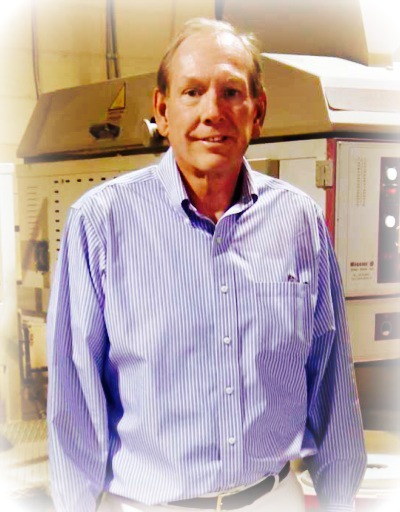 (PALM DESERT) – Earlier this year, 64-year-old Canadian business executive Trevor Temple was facing hip replacement — and he was more than a little wary.

The owner of AT Designs, a custom award and promotional company — with offices and manufacturing in both Toronto and Indio, California —  Mr. Temple is an active member of the business community, traveling often between Canada and his Palm Desert home.

Toronto doctors had already scheduled his surgery, where he was told to expect the “normal” two-and-a-half hour operation, with a three-day hospital stay. Only the price seemed right – the entire procedure would be covered under Canada’s publicly funded Medical Care Act, at no cost to Mr. Temple himself.

But dinner-party banter among friends raised an eyebrow, when Mr. Temple and his bride Janna overheard casual conversation about a minimally invasive approach that involved less pain, faster recovery, less muscle and tissue damage, even increased stability – with only a tiny scar.  On his next trip to the desert, he did his own online investigation, then attended a seminar led by renowned joint-replacement pioneer surgeon Douglas J. Roger.

There, he discovered the Direct Superior Approach.

“In 45 minutes, Dr. Roger actually had me excited about doing the replacement,” Mr. Temple recalls. “It seemed unreal. He thoroughly described the technique, the tools, the process. There simply was no comparison. There was no downside, either, except that if I really believed in it, and wanted to do my surgery here (in the States), I would have to pay for it myself.”

But 35-plus years of manufacturing experience – that includes supplying insignia items to the Canadian government, military, and police, no less – had taught this international businessman to trust his homework. Due diligence about the Direct Superior Approach only narrowed his decision.

The facts about the Direct Superior Approach speak for themselves. Peer-review journals – such as Clinical Orthopaedics and Related Research – report an average postoperative Harris Hip Score of 96.5, with no dislocations, no sciatic nerve palsies, no wound complications and low transfusion rates.

Walking an Hour-and-a-Half after Surgery

Only eight days after meeting Dr. Roger for the first time, Mr. Temple was in surgery. “It was a Wednesday, at 7:15 a.m.,” he says. “As Dr. Roger and his team came in, it was like meeting old friends. I woke up an hour-and-a-half later in my recovery room. The nurse came in, and — I’m not kidding – I got up and walked.”

Five hours later, he walked again. From that point, with modest assistance, he walked the hospital hallway every hour. A longer walk followed at 8 p.m. Early the next morning, he was asked to change from hospital garb to street clothes.

By 10 a.m., barely 24 hours after his surgery, an incredulous Mr. Temple was walking — without a walker.

When Dr. Roger appeared outside Mr. Temple’s hospital room and beckoned him to “get up and walk” to the hallway, it literally was a hallelujah moment. Two hours later, Mr. Temple walked out of the hospital for good.

“I’ve never looked back,” he says. “I never even used my pain prescription – just Tylenol. I followed the rules, with more short walks and plenty of rest. Within two weeks, I was working out at the club with weights. I got in and out of cars, on and off the toilet – with no apparatus. My friends simply could not believe I just had a hip replacement.”

But what about the cost?

“After all the facts are in,” smiles Mr. Temple, also an avid hiker who placed a premium value on the return of his active lifestyle, “it was worth every penny.”